It’s the 1930s, movies are being made faster than you can say MGM, and being made to make you feel good. Budgets are increasing and the studios are making pictures bigger and bigger. Within the industry, four women emerge who refuse to be “just another ingénue”. Judy Garland, Betty Hutton, Lucille Ball and Bette Davis each made their own strides to make women a more prominent and powerful force in Hollywood. Rebecca Perry gives us a night of marvellous melodies and scandalous headlines from the Golden Age of Hollywood! 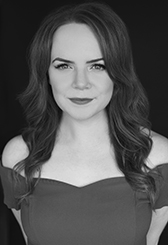 Rebecca Perry is a Toronto-based playwright, performer and producer. Her solo shows have toured from coast to coast in Canada, all around the UK and to the Republic of Ireland. From Judy to Bette: The Stars of Old Hollywood is her most recent work and has just returned from a very successful run at the 2019 Edinburgh Festival Fringe where she received four- and five-star reviews, audience acclaim and interest in presenting the show from venues in the UK, Australia, New Zealand and China. The show began touring with Smile Theatre in June 2019 and has a full-length tour with them from January to April 2020. In April, it is heading to the UK for three months to tour theatres throughout England and Scotland.

Rebecca’s two other solo shows, Confessions of a Redheaded Coffeeshop Girl and its standalone sequel, Adventures of a Redheaded Coffeeshop Girl have also taken her around the world. Confessions sold out its entire run (24 performances) at the Edinburgh Festival Fringe in 2015 which was Rebecca’s first intercontinental run. All three shows have earned five-star reviews and, between them all, Rebecca has won two NOW magazine awards, three Broadway World Awards (and a nomination for a fourth), a nomination for a Sustainable Practice Award by Creative Carbon Scotland and numerous audience choice awards across Canada.

Rebecca has also toured Canada and the US with Roseneath Theatre’s Dora Award-winning show, The Money Tree, and stars in the Canadian Comedy Award-winning web-series, A Gay Victorian Affair, which is preparing to film its second season. She also works in film and TV, most recently doing her first TV Christmas movie, Baby in a Manger. She has lead roles in the feature films Forest Fairies (alongside Simon Callow) and Best Friend from Heaven (alongside Kris Kristoffersen) and her work can be seen on Netflix, Amazon Prime, the Super Channel, T+E and more. She has also done voiceover work for several animated films and cartoons, including the animated feature film Fast and Furriest.

David hails from London, England, but now lives and works in Toronto. He is a writer, musician, stage manager and podcast producer who has worked on a wide variety of shows and productions since he started in theatre. He has been working with Rebecca Perry Productions for over four years, and has travelled all over Canada, England and Scotland with Rebecca’s solo shows. He has composed music for various Shakespeare productions by Dauntless City Theatre in Toronto, and his two-man musical, Out of the Lens, co-written with Nicholas Chave, was featured in Musical Works in Toronto. He is about to relaunch his solitaire board gaming podcast, Once Upon a Die.

Michael has worked nationally and internationally in the professional theatre, film and television industries. He has helmed numerous productions as director, writer, producer and casting director. Michael launched M2 Talent Agency in 2017 which has grown to be one of Canada’s leading and most reputable talent agencies.

Quinton is a Toronto-based musical director, arranger, accompanist and composer. He is the resident musical director at Rebecca Perry Productions, Small But Mighty Productions and We Are Here Productions. He is delighted to have had the opportunity to work on this production with David.

Claire has worked in the performing arts for over a decade and calls Toronto home. She’s been a technician, scenographer, academic, administrator and jack-of-all-trades. She’s very proud to be a part of this production, and hopes you enjoy it.

Jaime has been sewing for theatre artists, burlesque performers, and drag monarchs since 2007. His love for costuming specifically emerged from his grade 11 drama exam when he recreated costumes fit for restoration comedies. You can see his costumes all over Toronto and on Instagram – just search @lucindamiu.

Danielle is a Toronto based designer and technician. She received a BFA in Theatre Production and Design from York University. Previous credits include Projection Designer for The Trip To Bountiful (Alumnae Theatre); Lighting Designer for The Worst: A DoFo Inspired Musical (Meow Wow Productions); Lighting Operator on The Heidi Chronicles (Alumnae Theatre); and Sound Operator on Dr. Silver: A Celebration of Life (The Musical Stage Company).